Through his passion for music, Bart always aims at writing music that communicates in many ways.

Whether there’s the need to evoke, to accentuate or to blur images, emotions or atmospheres: Bart writes music of character. 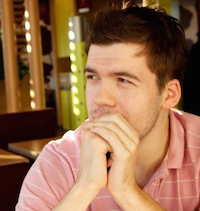 Bart starts attending music classes at the age of 6. After trying a few, he choses the oboe to be his main instrument. Winning several prizes at young soloist competitions in 1999, 2000 and 2004, Bart realizes that music has become a centre part of his life. Today, he still plays in different orchestras & ensembles.

After his high school graduation in 2006, Bart studies Music in Education at the Conservatory of Maastricht. Here he develops his singing and piano skills. He also comes in touch with many genres, styles & composition techniques which stimulate him to start composing on a daily basis.

One year later, Bart goes to the HKU University of Arts to study Composition for the Media. Here he improves his compositional skills furthermore. In this period he starts to write and arrange music for films, documentaries, games & ensembles.

In 2011, Bart obtained his Bachelor with Honours in Composition for the Media and the Master of Arts in Digital Design Cultures. Besides being an active composer, he is a parttime lecturer in composition, orchestration and music theory at the HKU University of Arts.